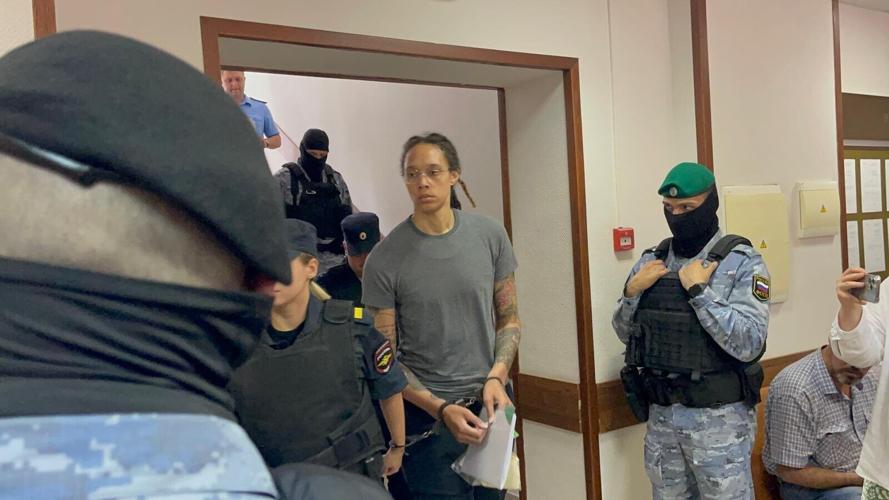 Brittney Griner is pictured here leaving a Russian court after she apologized and asked for leniency in an emotional speech on August 4. 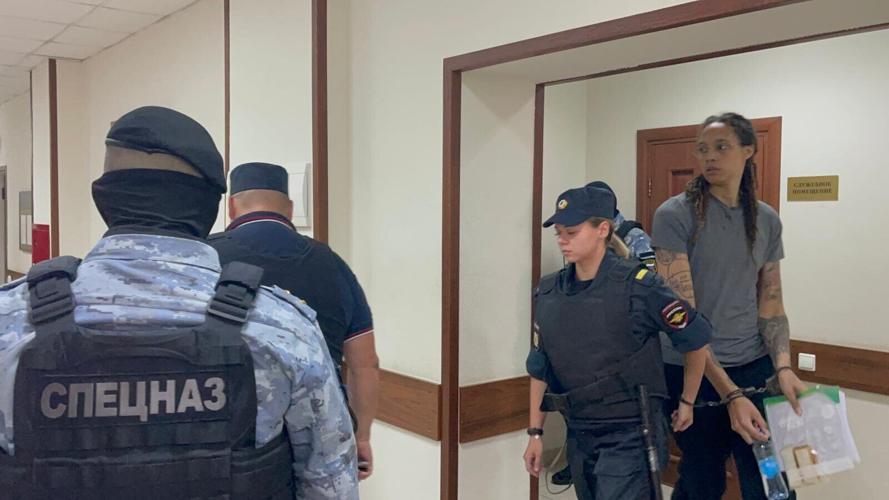 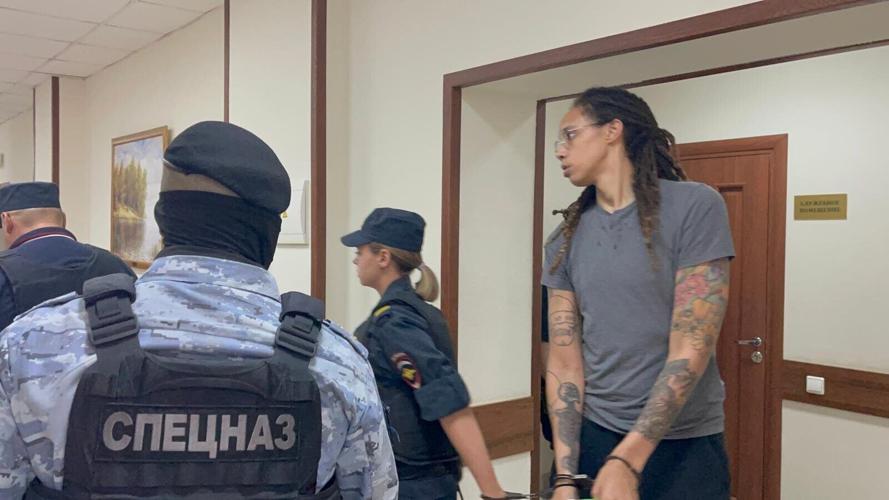 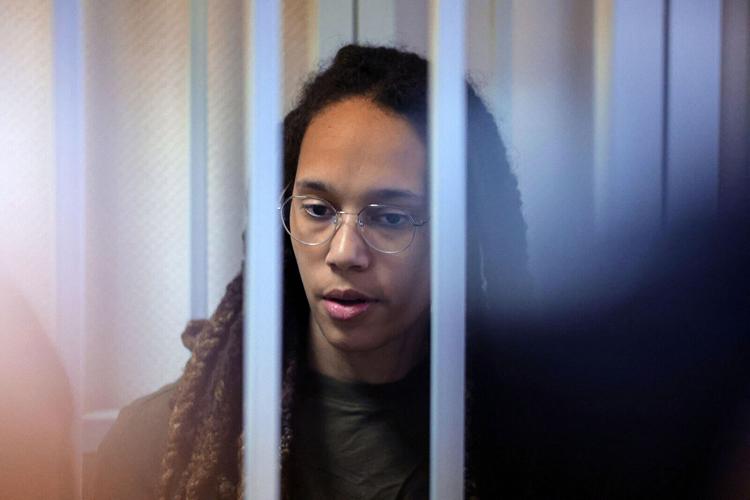 Closing arguments are expected on August 4 in WNBA star Brittney Griner's drug-smuggling trial in Russia amid concerns that she is being used as a political pawn in the country's war on Ukraine.

Brittney Griner is pictured here leaving a Russian court after she apologized and asked for leniency in an emotional speech on August 4.

Closing arguments are expected on August 4 in WNBA star Brittney Griner's drug-smuggling trial in Russia amid concerns that she is being used as a political pawn in the country's war on Ukraine.

American women's basketball star Brittney Griner was convicted of deliberately smuggling drugs into Russia and sentenced to nine years of jail time Thursday in a case that has raised concerns she is being used as a political pawn in Russia's war against Ukraine.

Judge Anna Sotnikova of the Khimki city court delivered the sentence and fined Griner 1 million rubles, or about $16,400. She said the court took into account Griner's partial admission of guilt, remorse for the deed, state of health and charitable activities.

Prior to the verdict, Griner apologized to the court and asked for leniency in an emotional speech.

"I want to say again that I had no intent on breaking any Russian laws. I had no intent. I did not conspire or plan to commit this crime," she added.

The verdict comes about six months after the 31-year-old was arrested at a Moscow airport and accused by Russian prosecutors of trying to smuggle less than 1 gram of cannabis oil in her luggage. The two-time US Olympic basketball gold medalist pleaded guilty to drug charges last month in what her lawyers say was an attempt to take responsibility and receive a lenient sentence.

The US State Department maintains Griner is wrongfully detained. Her supporters have called for her release and asked the US to take further steps to try to free her from the country, perhaps as part of a proposed prisoner swap.

Griner's lawyers, Maria Blagovolina and Alexander Boykov, said in a written statement the court ignored all the evidence they presented and that they will appeal the decision.

"We are very disappointed by the verdict. As legal professionals, we believe that the court should be fair to everyone regardless of nationality. The court completely ignored all the evidence of the defense, and most importantly, the guilty plea," they said in the statement.

"This contradicts the existing legal practice. Taking into account the amount of the substance (not to mention the defects of the expertise) and the plea, the verdict is absolutely unreasonable. We will certainly file an appeal."

US President Joe Biden said the lengthy sentence was "unacceptable" and called on Russia to release her immediately.

"Today, American citizen Brittney Griner received a prison sentence that is one more reminder of what the world already knew: Russia is wrongfully detaining Brittney. It's unacceptable, and I call on Russia to release her immediately so she can be with her wife, loved ones, friends, and teammates," Biden said in a statement.

In closing arguments Thursday, defense lawyer Blagovolina, a partner at Rybalkin, Gortsunyan, Dyakin and Partners law firm, argued that Griner never used marijuana in Russia and that she never had the intention of doing so. She had no need to bring the vape cartridges to Russia, the lawyer added.

All this confirms the complete absence of intent in her actions, Blagovolina argued. Even if Griner ever used medical marijuana, it was only at home back in Arizona, rare and only with a doctor's prescription, she added. She couldn't have known how strict the laws were in Russia, Blagovolina said.

Griner arrived at court in handcuffs Thursday and was escorted by Russian officers into the defendant's cage. Once uncuffed, she spoke with her legal team and then held up a photo of the UMMC Ekaterinburg basketball team, the Russian squad she played for during the WNBA offseason.

Boykov argued Griner had no opportunity to properly examine the court documents. He said that the Russian constitution guarantees everyone the right to use their native language and the free choice of the language of communication.

Boykov cited an instance when a language interpreter provided to Griner flipped through a lengthy document offered by an investigator for translation and then told Griner, "Basically, it means that you are guilty."

Charge d'Affaires of the US Embassy in Russia, Elizabeth Rood, arrived at the court Thursday ahead of the hearing. She has appeared in court throughout the trial and on Tuesday said the US would "continue to support Miss Griner through every step of this process and as long as it takes to bring her home to the United States safely."

How the trial has gone

Griner's attorneys laid out some arguments undermining the prosecution's case and claiming the basketball player's detention was not handled correctly after she was stopped February 17 by personnel at the Sheremetyevo International Airport.

Her detention, search and arrest were "improper," Boykov said last week, noting more details would be revealed during closing arguments.

After she was stopped in the airport, Griner was made to sign documents that she did not fully understand, she testified. At first, she said, she was using Google translate on her phone but was later moved to another room where her phone was taken and she was made to sign more documents.

No lawyer was present, Griner testified, and her rights were not explained to her. Those rights would include access to an attorney once she was detained and the right to know what she was suspected of. Under Russian law, she should have been informed of her rights within three hours of her arrest.

On Tuesday, at the seventh hearing in her case, a defense expert testified that the examination of the substance contained in Griner's vape cartridges did not comply with Russian law. Blagovolina also told CNN her team's experts identified "a few defects" in the machines used to measure the substance.

At trial, Griner has testified she has a doctor's prescription for medical cannabis and had no intention of bringing the drug into Russia. Following her detention in February, she was tested for drugs and was clean, her lawyers previously said.

In her testimony, Griner "explained to the court that she knows and respects Russian laws and never intended to break them," Blagovolina said after last week's hearing.

"We continue to insist that, by indiscretion, in a hurry, she packed her suitcase and did not pay attention to the fact that substances allowed for use in the United States ended up in this suitcase and arrived in the Russian Federation," Boykov, of Moscow Legal Center, has said.

The trial has played out amid the backdrop of Russia's invasion of Ukraine and the country's saber-rattling with the US and Europe.

Last week, CNN reported that President Joe Biden's administration proposed a prisoner swap with Russia, offering to release a convicted Russian arms trafficker, Viktor Bout, in exchange for Griner and another American detainee, Paul Whelan. Russian officials countered the US offer, multiple sources familiar with the discussions have said, but US officials did not accept the request as a legitimate counteroffer.

The Kremlin also warned Tuesday that US "megaphone diplomacy" will not help negotiations for a prisoner exchange involving Griner. Kremlin spokesperson Dmitry Peskov said Moscow believes these talks should be "discrete."

Griner's family, supporters and WNBA teammates have continued to express messages of solidarity and hope as they wait for the conclusion of the trial. Her WNBA team, the Phoenix Mercury, is expected to play the Connecticut Sun on Thursday night at 7 p.m. ET.

Before trial proceedings last week, the WNBA players union tweeted, "Dear BG ... It's early in Moscow. Our day is ending and yours is just beginning. Not a day, not an hour goes by that you're not on our minds & in our hearts."