ORO VALLEY, Ariz. (KVOA) - A teacher at the Casas Christian School in Oro Valley is on administrative leave and being investigated by Oro Valley Police after multiple allegations of sexual misconduct with students.

The News 4 Tucson Investigators broke the story earlier this month and have learned the teacher has been under the microscope before.

The N4T Investigators spoke exclusively with a parent of two children who go to Casas Christian School doesn’t want her identity revealed, but said her 13 year old daughter was a victim of the teacher.

She said the incident happened last year but only learned of it recently when her daughter felt comfortable to speak up about it.

“I felt disgusted and sick and I was upset and so when I sat her down and talked to her about what had happened to her, I said why didn’t you come to me and tell me what was going on? Why didn’t you tell me? She said that her and many other students had tried to tell the teachers and administration about what had been happening,” the mother said.

She said her daughter and other impacted children tried warning staff about what allegedly happened but were told the teacher would never do anything like that and were punished, accused of lying.

The N4T Investigators asked school officials about that, a spokesperson said, “At no point did a student face repercussions for reporting any incidents. Any suspension or expulsion of any student last year is an unrelated event.”

The mother said she became very upset when she learned that several other children had reported similar experiences and that the same teacher faced a sexual misconduct investigation last year, something she said the school never told parents about.

The N4T Investigators confirmed with Oro Valley Police that the teacher was under investigation last year as well. We obtained the police incident report. According to that report, the teacher’s daughter went to school administration complaining that other students “hated her dad” because “he was touching girls.”

School staff took that information further and got Oro Valley Police involved. Police made contact with one of the alleged victims, a student at the school. According to officers, that student said the teacher had touched her buttocks while instructing her to go do something related to class.

Police spoke with the teacher, he denied all of the allegations.

According to the police report, investigators had no witnesses so found no probable cause to charge the teacher. The case was closed without charges.

The mother who spoke to us about the latest incident said she has tried to get a meeting with school officials but said they refuse to meet with her.

“They knew about it and their response was to not tell parents that there was some sort of investigation of misconduct with this teacher,” she said.

She gave us a letter sent to school officials by several parents wanting a town hall style meeting to discuss concerns they have about the teacher. It’s unclear if that will happen.

Oro Valley Police told us they have just started their investigation into the latest claims and are unable to provide many details about the circumstances of the allegations.

“We take all allegations very seriously that’s why we do a thorough investigation on all these complaints,” said Darren Wright the Public Information Officer for OVPD.

Another mother of a student at the school, who also wants her identity hidden, told the N4T Investigators she supports the school. She said her son had the teacher's class and never saw anything inappropriate.

“I am glad it’s being investigated, I am glad the police are doing such a thorough job. What bothers me is that parents are having their own public trial of this human being who has taught our children," she said.

She said she doesn't know if the teacher is guilty or innocent, but feels the school leadership did everything right in their response to the claims.

“A lot of the mom’s feel like we are happy to have our children there and we’ve been grateful for the job this teacher has done and also for the job the board is doing in handling this.”

Casas Christian School sent us the following statement in full:

"We recognize that navigating a situation like this can be very challenging and concerning. Prioritizing what is best for our students continues to guide our process and decisions. As we wrote last week, our number one priority is to provide a safe learning environment for our students.

Throughout this investigative process, we have received five main questions, which we have addressed below:

First, due to the open and ongoing investigation, releasing the name of the Teacher Under Investigation is neither appropriate nor warranted at this time.

Fourth, at no point did a student face repercussions for reporting any incidents. Any suspension or expulsion of any student last year is an unrelated event. Students and parents receive a handbook upon admittance to the school, which parents must read and sign. It outlines the reasons for suspension or expulsion, of which reporting inappropriate behavior is not one of them.

Fifth, all teachers, regardless of their place of employment, are required by state law to be mandatory reporters in cases of injury, abuse, and neglect. CCS teachers are trained annually on required reporting procedures. This training includes review and acknowledgment of the below Arizona Revised Statutes:

A.R.S. § 13-3620. A: “Any person who reasonably believes that a minor is or has been the victim of physical injury, abuse, child abuse, a reportable offense or neglect that appears to have been inflicted on the minor by other than accidental means or that is not explained by the available medical history as being accidental in nature or who reasonably believes there has been a denial or deprivation of necessary medical treatment or surgical care or nourishment with the intent to cause or allow the death of an infant who is protected under section 36-2281 shall immediately report or cause reports to be made of this information to a peace officer, to the department of child safety or to a tribal law enforcement or social services agency…”

The slide below is used in the annual teacher training: 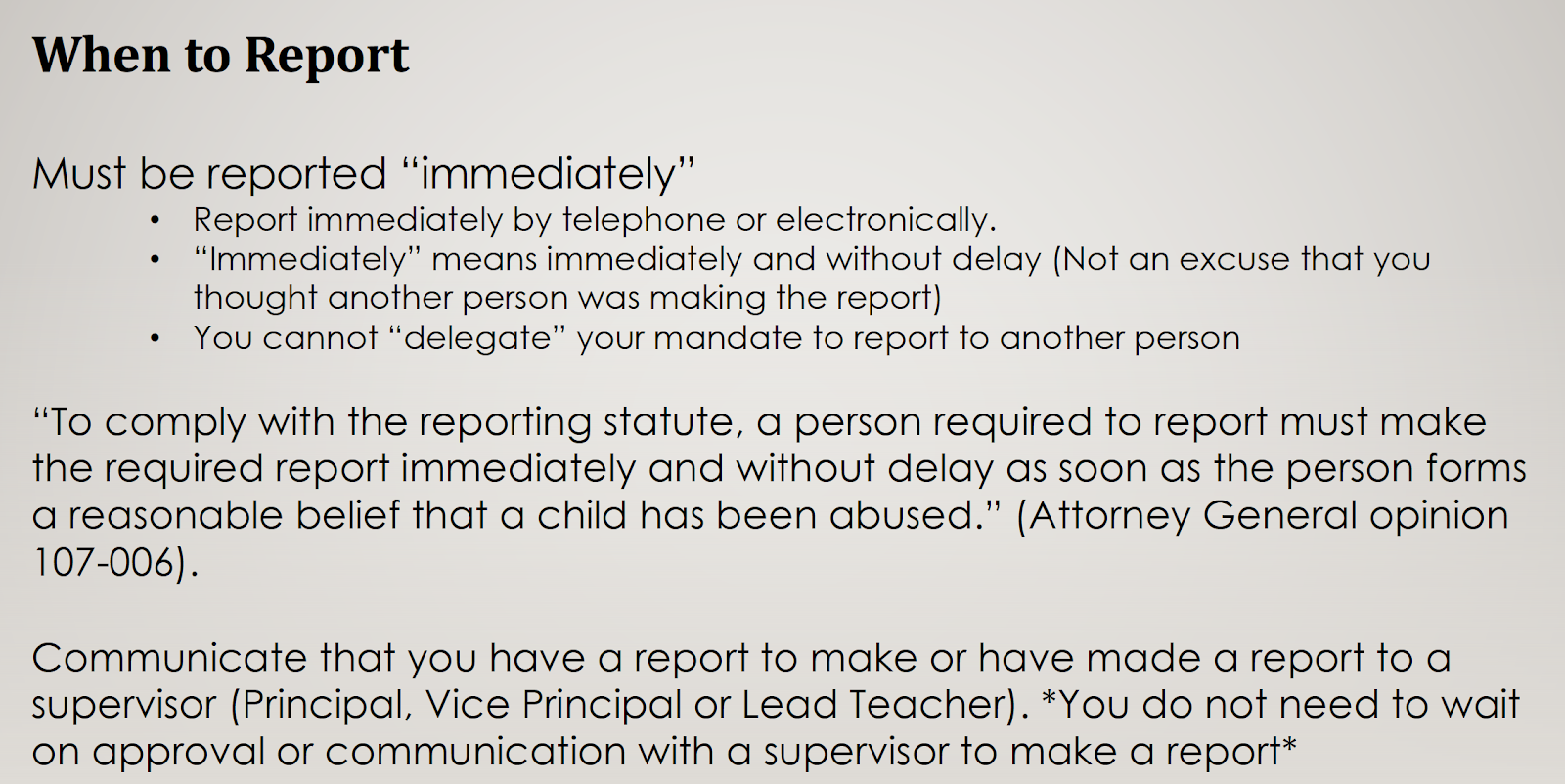 As the process continues, the Teacher Under Investigation remains on leave."

We will update you as we learn more about the latest investigation. If you have a story you'd like the N4T Investigators to investigate email us at investigators@kvoa.com or call our tip line at 520-955-4444.

Chorus Nylander is the Chief Investigative Reporter for News 4 Tucson. He is focused on giving the voiceless a voice and holding the powerful accountable.

Leonid meteor shower peaks this weekend: Here’s how to see it

IOC: No link between Japan virus record and Olympics